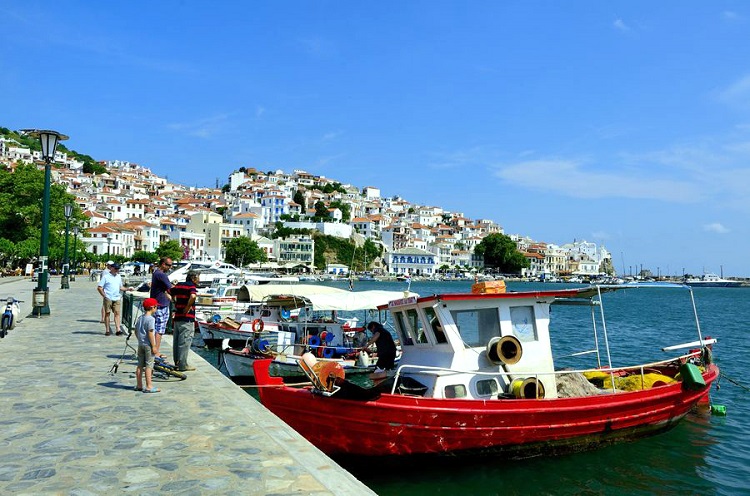 Have you ever watched a movie and wondered to yourself if the landscape on screen is real? Does this incredible place even exist? And if it exists, where in the world is it? Truth is, many major films are shot on a closed sound stage and the imagery is produced through computers; but sometimes, productions venture out into the real world to create movie magic.

These movies unveil some of the most scenic, romantic and simply stunning locations around the world!

The 2008 movie, Mamma Mia has much to boast about, namely Meryl Streep and the soundtrack of ABBA. Yet, its trump card is its location – the beautiful island of Skopelos (one of the Sporades islands) in Greece. The film has been shot across the Skopelos Island at Glysteri beach, Kastani beach, the chapel of Agios Ioannis Prodromos and the east Pelion coast in mainland Greece, all of which are breathtakingly beautiful places.

Shere – Surrey, England (from The Holiday)

Experience the enchanting English countryside through the 2006 romantic comedy, The Holiday. The movie was shot in the quaint little village of Shere in Surrey. Shere, housing a museum, a tea shop, and a couple of pubs, has since become quite popular with tourists from around the world. The Tillingbourne stream that runs through the center of the village is its most precious attraction. You can easily find cheap New Delhi to Mumbai flights via ixigo and take a direct or connecting flight to London and drive by car or take a train to reach this place.

Matamata, New Zealand (from Lord of the Rings)

Some of New Zealand’s most magnificent backdrops across both the North and South islands were showcased in the Lord of the Rings trilogy. ‘Hobbiton’ – the cute little house was set in the undulating Matamata hills, the scenes of ‘Mordor’ and ‘Mount Doom’ were shot in the Tongariro National Park within the volcanic area of Mount Ruapehu.

Many scenes of the movie, Braveheart, have been filmed in Trim Castle located in the town of Trim in Ireland. This 12th century castle is open to the public throughout the year. Other picturesque locations from the movie are the Blessington lakes and Wicklow Mountains National Park.

The most memorable scenes of the 2010 science-fiction film, Inception have been shot in iconic locations across Paris. A reality-bending scene is filmed on the Pont de Bir-Hakeim near Passy metro. You can also visit the corner of Rue César Franck and the Rue Bouchut in the 15th arrondissement. Sit down and enjoy a sunny day at the Stuzzi cafe (or “Debussy” in the movie) and you’ll be following the footsteps of Leonardo DiCaprio and Ellen Page.

Notting Hill is surely the most picturesque part of London and its charms were exquisitely captured by the 1999 film of the same name. The busy and bustling Portobello Road and its market is everything like the movie showcased. The house with the blue door is now black (280, Westbourne Park Road). The scene where they watch the science fiction movie is also very-much real. The cinema house is the classic Coronet Cinema which is located at 103 Notting Hill Gate, next to the tube station. The park where Hugh Grant makes a ‘whoopsy daisy’ date blunder is the Rosmead Gardens.

Which movie location has left an irrevocable impression on you, and which of these destinations will you be visiting first?

10 Must Have Campervan Accessories

How to Book a Desired Hotel for a Holiday

Getting the most out of Malaysia